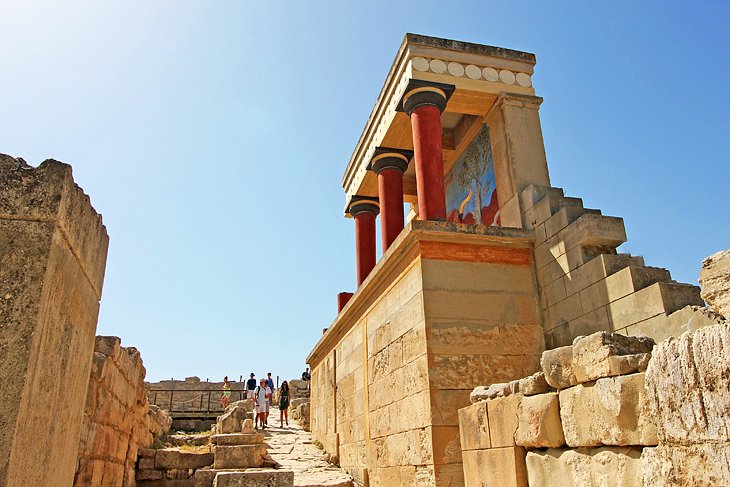 Many tourists start their trip in Heraklion, which has an international airport (five kilometers east of town), and a ferry port with service to Athens’ port, Piraeus, as well as several other Greek Islands. You can also visit Santorini on a day trip from Heraklion. Midway between Chania and Heraklion, Rethymnon’s lovely old town is made up largely of Venetian-era buildings, though there is some evidence of the year spent under Turkish rule (1669-1898) such as the towering minaret. A perfect place to day trip from the resorts of the north coast, Rethymnon has everything you need to justify leaving the beach for a day. Many historic buildings have been turned into small boutique hotels, shops, and restaurants. Wandering the shady, twisty streets and alleys in a quest to find the perfect photo followed by a long lunch on the ancient Venetian Harbour is a fine way to while away an afternoon. The mountains behind Rethymnon are home to rural villages and some excellent agritourism centers. The area makes a good base for visiting nearby attractions such as the Samaria Gorge and Mount Psiloritis.

Before a visit to Knossos, to better understand the ancient history and people of Crete, go to the Heraklion Archaeological Museum in the centre of the city. The findings from the palace are stored, preserved and displayed in the museum. There are frescoes, pottery, jewellery, weapons and sculptures from the Minoan civilisation, but also discoveries from the Neolithic and Roman eras. Don’t miss the implausibly delicate Malia Pendant, made circa 1800 BCE. Just outside the capital city of Heraklion, the Palace of Knossos once served as the political centre for the Minoans, who created the first sophisticated civilisation in Europe. At the entrance you’ll find dozens of certified guides eager to show you the wonders of the palace, from important archaeological discoveries to the mythological stories of King Minos and the minotaur. Get there early to avoid the crowds, as it is one of the most popular sites in Crete.

Located some 5 km (3 miles) south of Heraklion, the Palace of Knossos is the most important and best known Minoan site in Crete. Knossos is also often associated with the legend of the Athenian hero Theseus killing the Minotaur. The great palace was built gradually between 1700 and 1400 BC, with periodic rebuildings after destruction until it was devastated once and for all by fire. Knossos incorporated numerous rooms such as the Throne Room, named for a large chair that is built into the wall, facing several benches. The main function of the palace is still under debate. It could have been used primarily as an administrative or a religious center.

On the remote south coast, looking towards Africa across the Libyan Sea, are quaint seaside villages where you can escape from the main tourist scene. This is the best place for travelers looking for a quiet escape but still wanting to enjoy a beach vacation. The scenic, mountainous interior is home to fertile soil and is where you’ll find much of the country’s agriculture, along with charming villages of whitewashed houses on narrow, twisting streets. Good roads and highways connect cities on the north coast with the towns on the south coast, and make for beautiful drives through the mountains. Learn more about where to go and what to see with our list of the best places to visit on Crete. Find more information on https://www.chaniacar.com/.